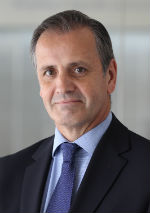 Prior to joining the IHI, Derek had been Director General (DG) Health and Chief Executive of the National Health Service (NHS) in Scotland since November 2010. From January 2011, the DG role was extended to cover Health and Social Care. He was the principal adviser to Scottish Ministers on health and care issues and he provided direction to the work of NHS Boards in ensuring the delivery of high quality health and healthcare.

Derek has had a varied background in policy analysis during thirty years in public service . From 2002 to 2004, he spent two years as Principal Private Secretary to Scotland’s First Minister. Thereafter, Derek moved on to work on developing a framework for service redesign in the NHS. He was a 2005-06 Harkness/ Health Foundation Fellow in Health Care Policy and spent a year in the United States working with Kaiser Permanente and the Veteran’s Health Administration. Derek was appointed as Director of Healthcare Policy and Strategy on his return. In that role he was responsible for advising the Scottish Government on all healthcare quality issues, including patient safety, and he also led on healthcare information technology.

In 2013, Derek was made a Companion of the Order of the Bath in Her Majesty the Queen’s New Year’s Honours List, in recognition of his contribution to healthcare. He was also awarded a Doctorate in Business Administration from the University of Strathclyde and a Companionship of the Institute of Healthcare Management, also in recognition of his contribution to health and healthcare.