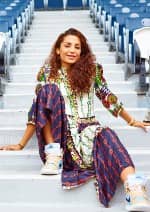 Nadia Nadim was born in Herat, Afghanistan, in January 1988. She grew up in Kabul, with her parents and her 4 sisters. When Nadia was 12, her father, who was a General in the Afghan army, was killed by the taliban.

Nadia then fled the country with her sisters and mother, and ended up in Denmark after months on the run. Since then, Nadia has learned to speak 11 languages fluently, she has become one of the most powerful female athletes, playing professional football for clubs such as Manchester City, PSG and now Racing Louisville in the US. Nadia has also combined her professional career with studies, and in January 2022 she graduated from Med School as a doctor. Viaplay/NENT is currently shooting a documentary about Nadia, that will air late 2022, in 3 episodes.